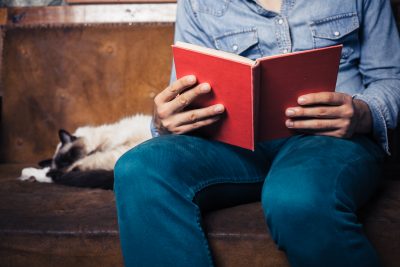 “A heartwarming, true story of an abandoned kitten who went on to live an extraordinary life, inspiring a single, struggling mother, transforming a sleepy library and the inhabitants of its depressed Iowa farm town, and ultimately capturing the hearts of animal lovers around the world.” (Anonymous review on the book)

Marley and Me: Life and Love with the World’s Worst Dog by John Grogan

This book will make you laugh and cry. It is not a training your dog book or an unpredictable story about a dog and its owner but it is a very entertaining story about being a dog owner and the bond that grows between dog and human. You may not learn anything new or agree with the “training” in the story; but you will at least learn to appreciate the unconditional love and affection a dog can bring.

Charlotte’s Web by B. White

A children’s novel but still a must read if you have never read it. It was published October 15, 1952 and tells a story of a pig named Wilber and his unlikely friendship with a barn spider named Charlotte. It’s considered a classic of children’s literature, enjoyable to adults as well as children!

The Art of Racing in the Rain by Garth Stein

A heart-string pulling but extremely funny and uplifting story of love, loyalty and family written in a dog’s perspective. A perfect read for a cold, winter afternoon.

Modoc: The True Story of the Greatest Elephant That Ever Lived by Ralph Helfer
A true story of a boy and an elephant that were raised together in a small German circus town that is full of loyalty and adventure. It is an unusual pet story and is hard to believe it is a true story but nonetheless, a great story to read.

Zamba: The True Story of the Greatest Lion That Ever Lived also by Ralph Helfer
Another beautiful, true life story of a bond between an animal and human, this time being a lion. A lion that would appear in many motion pictures, on television, and in magazines.

Unlikely Friendships: 47 Remarkable Stories from the Animal Kingdom by Jennifer S. Holland
A must read for animal lovers! The stories and pictures are beautiful. A short, easy to read book about animals filled with heart-warming pictures. A pit-bull napping with his ferret friend? Come on! That’ll tug your heart strings.

Earnest by Kristin Von Kreisler
An endearing story of the powerful connections between humans and animals that is sure to please dog lovers everywhere.
Written by : Jill Thiessen, Clinic Manager